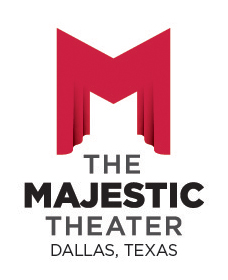 In 1921, the Majestic Theatre opened its doors as the grandest of all the theaters along Dallas’s Theatre Row. Originally home to nine theaters and vaudeville houses, The Majestic is the only venue remaining on Elm Street.

The Majestic Theatre is the last remaining vaudeville house on Dallas’s historic Theatre Row. Built in 1921, it is a Dallas Landmark and on the U.S. National Register of Historic Places. Today the Majestic is operated by the City of Dallas as a performing arts center. The interior of the theatre features original Corinthian columns, 23K gold leaf accents, brass mirrors and a grand crystal chandelier. A wide variety of acts have performed at the Majestic, from Houdini to Mae West during the vaudeville era to Johnny Cash and Leon Bridges.

For more information and a schedule of events, visit their website at majestic.dallasculture.org

Images from the Majestic Theater